You will have the opportunity to see cultural sights of historical value, as well as to get to know the crafts in our area.

Tsari Mali grad is a late antique Roman fortress and fortified settlement in the southwest part of Bulgaria, Sofia region, Samokov Municipality. It is located on the hill of St. Spas in Verila Mountain, above the village of Belchin. Tsari Mali Grad cultural and historical complex was officially opened on July 18, 2013. It includes a late antique fortress, a church ensemble and relax and sports areas on the hill of St. Spas. The southern, northern and eastern fortress walls have been preserved and restored. Tower No. 5 (on the south wall) and both towers on the north wall flanking the gate have been reconstructed. The church ensemble has been preserved and restored, and the 15th century church has been reconstructed. The museum expositions - "Prehistory", "Life and livelihood in late antiquity", "Ceramics", "Numismatics" and "Military Life" are placed in the two towers which have been reconstructed to the roof on the north wall. Two hiking trails have been built to the site, starting from the village of Belchin, as well as a rail passenger transport facility with a rope drive. 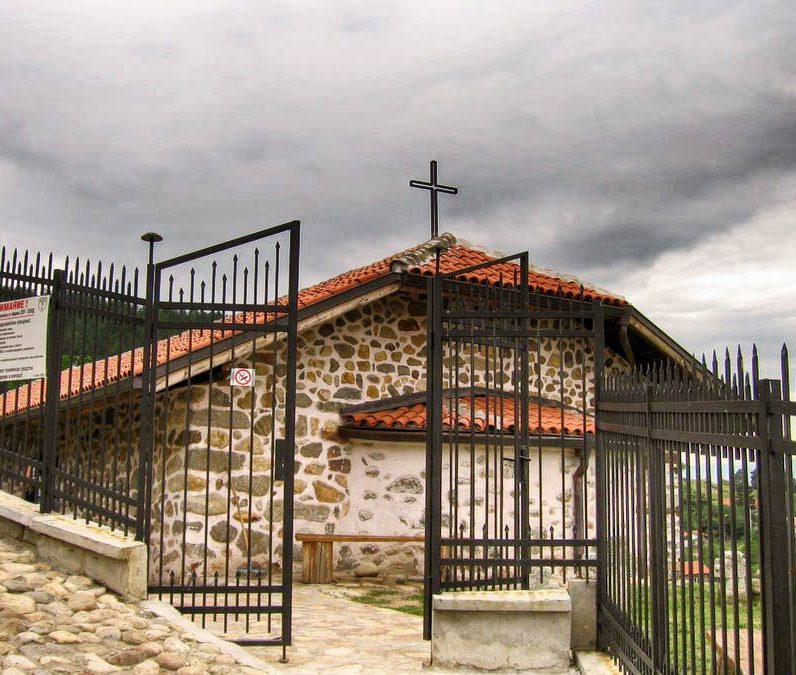 St. Petka church is one of the sanctuaries for the village of Belchin and the whole Samokov region. It has been declared a monument of artistic culture - I degree. The church is typical for the medieval architecture - single-nave, vaulted, with an additional narthex. It was built in the 16th century, on the foundations of an earlier temple, dating from the second Bulgarian kingdom - around 13th-14th century according to archeological data. The first church was burnt down during the Ottoman invasion in the last quarter of the 14th century.

HISTORICAL MUSEUM in the town of SAMOKOV

The Historical Museum is another proof of the high intelligence of the citizens of Samokov, of their sense of historical memory and high public commitment. In the early thirties, the famous Samokov artists Naum Hadzhimladenov and Vasil Zahariev gave the idea a museum collection to be housed in the community center. The idea was put into effect in the summer of 1931 with the active participation of two other famous masters of the brush - Hristo Yonchev - Kriskarets and Pavel Frantsaliyski. Today the museum has about 30,000 exhibits. 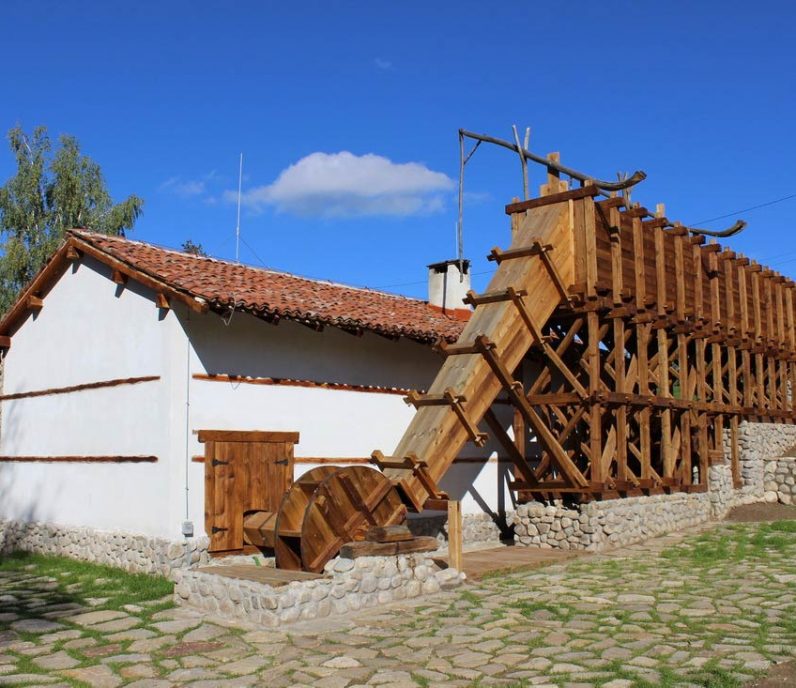 In 2015 a reconstruction of a working model of a metallurgical facility for processing primary iron extracted in the furnaces was made, also called ‘Samokovo’ or ‘Madan’, used from the 14th-15th century to the beginning of the 20th century. The town of Samokov appeared gradually near the former Samokovi /iron ore processing plants/, which gave the name of the town. The region of Samokov is one of the famous regions of the medieval iron industry in Bulgaria and the Balkan Peninsula. In the region there were excellent conditions for iron industry: iron ore, abundant water, vast forests for coal and wood, good specialist craftsmen, free labor and markets.

Sarafska house in the town of Samokov

The history and the name of Sarafska House are connected with the Jewish family Arie, whose ancestor, born in Vienna, settled in Samokov in 1793. The wealth and splendour of this enterprising family reflected in their houses and in the construction of the Synagogue at a time when there were no significant public buildings on our lands and the external glamour of the home was still something new. Of all the splendour of the house, the wood-carved ceilings and partly the decorative ornaments in the hall are in their original state. The furniture was collected for the purposes of the restored house, a cultural monument. 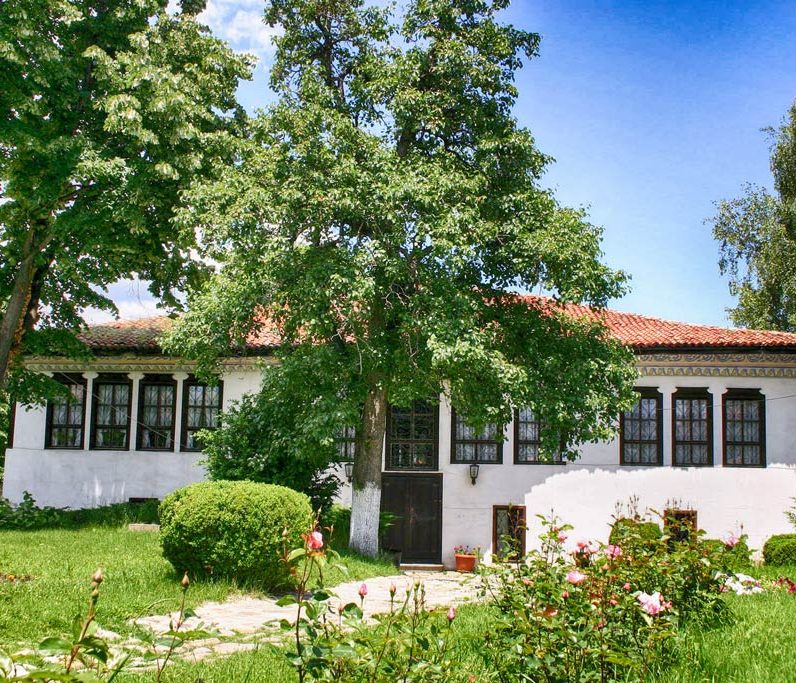 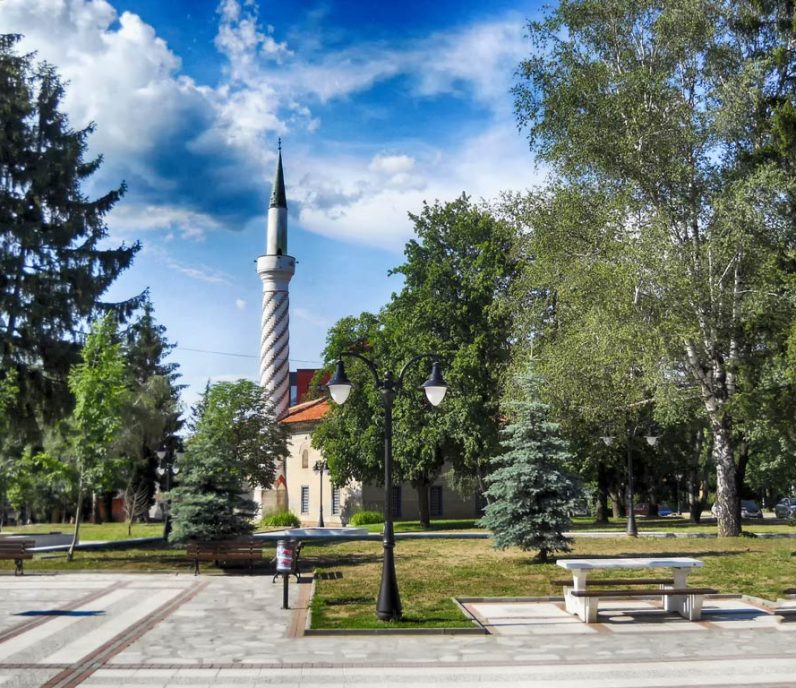 Bayrakli Mosque, also known as Yokush Mosque, is a Muslim temple in the Bulgarian town of Samokov. The mosque is a cultural monument of national importance. The mosque was built in the middle of the 19th century, probably by Bulgarian masters. The mosque has a large prayer room with dimensions of 14 by 14.8 meters. Four free columns in the center hold a rammed drum topped with a wooden dome. The pre-prayer room is an arched vestibule with a second floor for the closed women's area. The minaret has a spiral brick decoration. Outside and inside the mosque is richly painted with ornaments by painters from the Samokov school. The church was restored from 1960 to 1966 under the supervision of architect Nikola Mushanov and the artist Georgi Belstoynev and has been a museum ever since.

Church of the assumption of the blessed virgin, Samokov

A church called the Assumption of the Blessed Virgin, also called Mitropolitska, was consecrated in the town of Samokov in 1793. The church was built on the place of a smaller church from the 17th century with the funds of patriotic citizens of Samokov. Half hidden in the ground, it was also surrounded by a ring of high stone walls. In 1805, the church was rebuilt in order to transform it from a single to a three- transept church, higher and more spacious. It took a quarter of a century for the builders to complete the new temple. The new prayer hall has strong stone walls. Two rows of columns divide it into three transepts, the middle of which is wider than the lateral ones. Wooden gratings and wooden walls close a chapel and a staircase to the emporium on the west. An altar apse has been added on the east, which extends beyond the rectangular prayer hall. The church ends with an open narthex, whose painted front is carried by slender columns with carved heads. 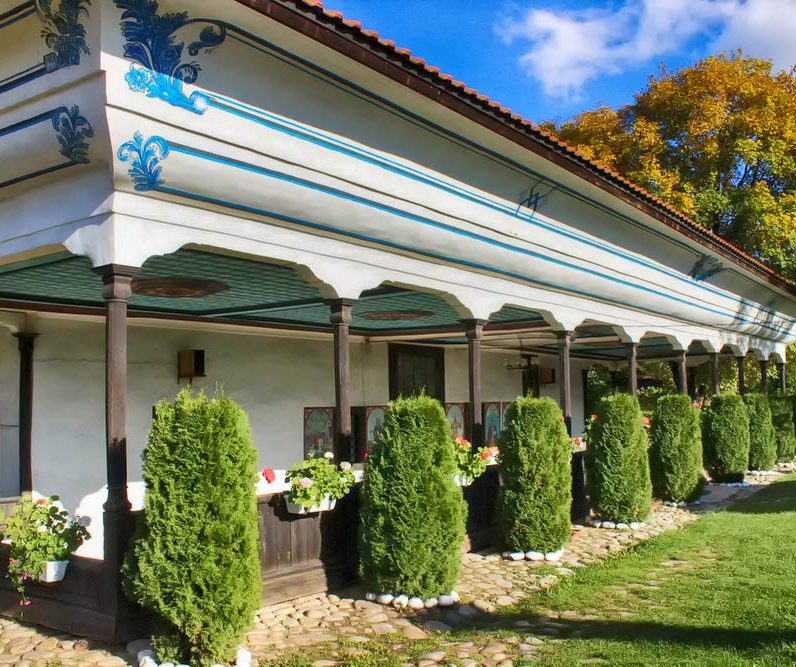 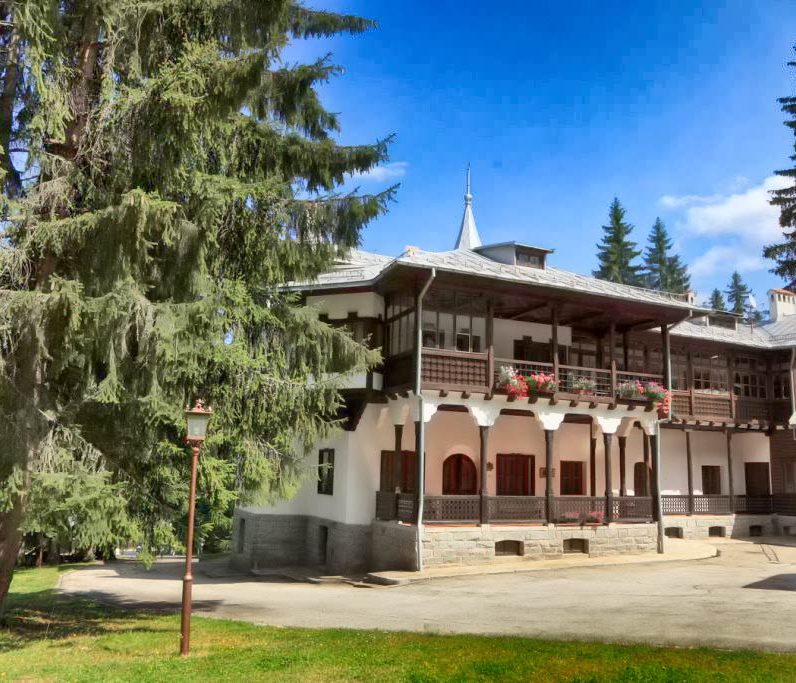 Tsarska Bistritsa is a former palace of the rulers of the Third Bulgarian Kingdom. It is located above the resort of Borovets in Rila Mountain. It was built between 1898 and 1914. It served as a hunting lodge for the kings Ferdinand I and Boris III. The architectural appearance is influenced by the traditional Bulgarian Revival style, but at the same time it has elements of the European architectural influences. Tsarska Bistritsa is an important part of the history of the last Bulgarian royal dynasty. The park around the palace is extremely beautiful and tidy. Many rare tree species are gathered here - King Ferdinand had a hobby of carrying young trees of rare species from different places around the world he had visited. The Bistritsa river flows through the estate, which is tamed and terraced, and the small bridge and the alleys around it predispose for romantic walks. Working hours: from Thursday to Sunday - from 9.00 to 17.00.

Rila Monastery is a Bulgarian stauropegic monastery, one of the most important cultural monuments in Bulgaria, a symbol of the country, included in UNESCO World Heritage List. It is located in the southwest part of Bulgaria, district of Kyustendil, municipality of Rila. It was founded in the 10th century by St. John (Ivan) of Rila the Wonderworker near the upper stream of the Rilska River. This is the largest monastery in Bulgaria - 5 floors, 4 of which are visible. The monastery "St. John of Rila" was built on the place of an old hermitage in 927 - 941 by St. John of Rila the Wonderworker in Rila Mountains. In 1335 in the yard of today's monastery a defensive tower and a small one-transept church were built by the local feudal ruler Protosebastos Hrelio. The tower is the oldest preserved building in the monastery complex and its style belongs to the architecture of Tarnovo Art School. On the top of the tower is the ‘Holy Transfiguration’ chapel with valuable frescoes from the 30s of the 14th century. 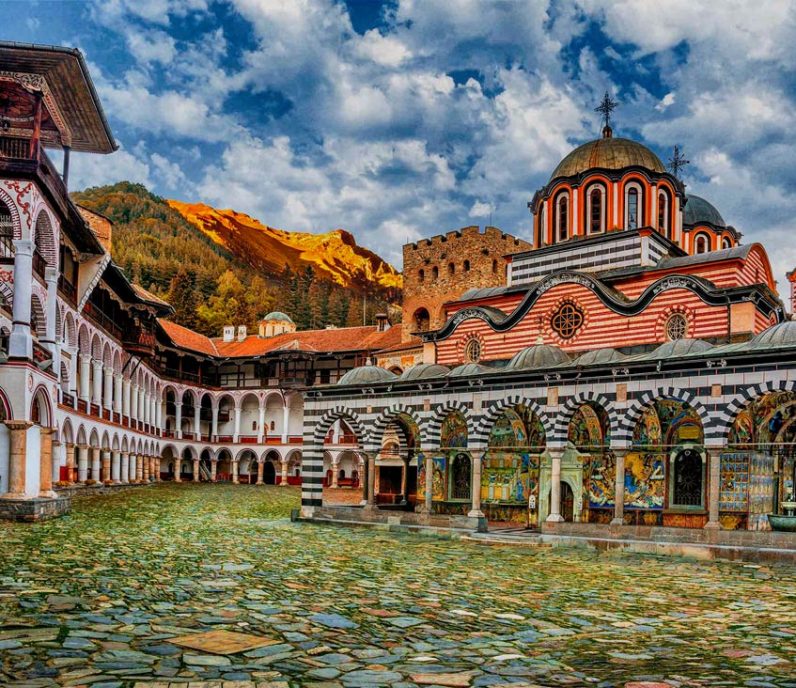 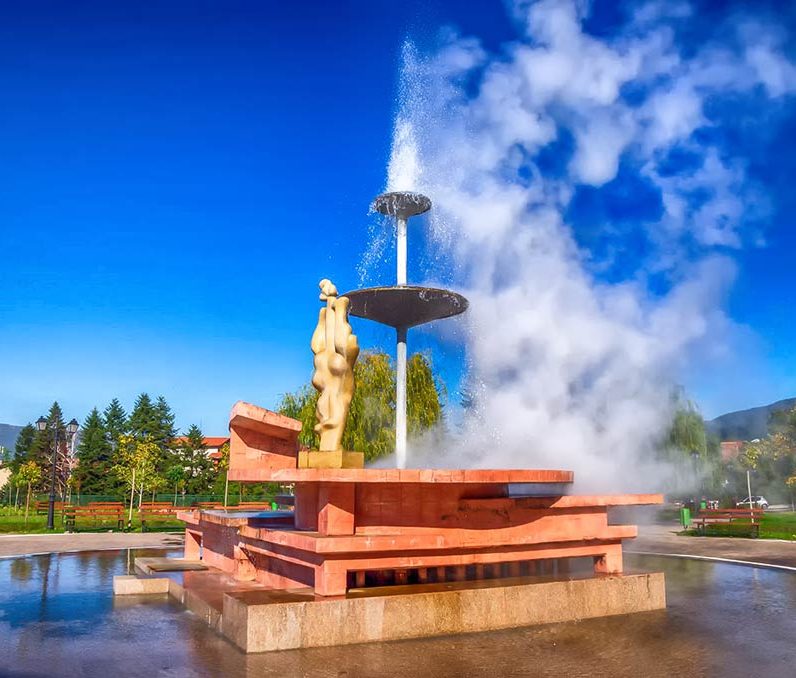 The geyser in the town of Sapareva banya

The geyser in Sapareva Banya with its 103 degrees is one of the hottest in the world. The only one in continental Europe, it is the most turbulent of the geysers in the world - it pulsates every 5-6 seconds and is the most accessible. It was discovered in 1957 during drilling. Its flow rate is 18 l / sec., the height of the water column is 18 meters and springs from a depth of 75 meters. During the summer evenings, many colored lights are turned on, which makes it a remarkable sight.

Be our guest and book your unforgettable vacation now!

© 2023 All rights reserved.
Design and development with from Kiril Etropolski